Fitzsimon and Brogan were both members of the band, Pretty Blue Gun, who were signed to an indie label licensed to Sony.  They released two albums which were critically acclaimed. Some of the guest musicians included members of The Art of Noise, Dave Bronze (Eric Clapton’s bass player), Tobias Boshell (Moody Blues) and Pip Williams who played guitar on the Walker Brothers’ track, ‘No Regrets’.  The albums were produced by Pat Collier, who produced Katrina and the Waves’ international hit, ‘Walking on Sunshine’.  The band went on national tours across the UK until disbanding.

Neil Fitzsimon, the songwriter, and Bee Brogan, the vocalist, then went on to form a song writing/production partnership that led to placement of their songs in Film and TV.  They also wrote a musical, Jack Dagger, which was showcased at the Greenwich Theatre, London for the Musical Futures Award.  It was also showcased at the Bridewell and the Royal College of Music in London.  They have also just had a song placed in a USA Sci Fi Feature film. They recently had a track reach number 3 in a French national download chart. Their single, Girl in a Gilded Cage, reached number one on the iTunes chart in Belgium for all genres.

Fitzsimon and Brogan see themselves as a studio act much in the vein of Tin Tin Out and Talk Talk.  Their influences range from The Beatles, Elvis Costello, Jimmy Webb, Jacques Brel, The Smiths and David Bowie. Their aim is to produce pure pop for now people.

They are honoured now to be working with one of their heroes, David Bowie’s drummer from The Spiders from Mars, Woody Woodmansey. Previous to this they worked with Elvis Costello’s drummer, Pete Thomas. These new tracks are on their newest album, This Wicked Pantomime which is to be released soon. 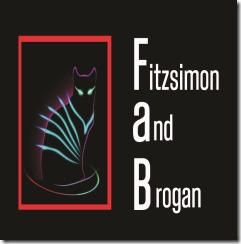 Every once in a while, we like to push the boundaries of the scope of the pop music we release. FaB (Fitzsimon and Brogan) are one such example. In the 90’s, Neil Fitzsimon and Bee Brogan were both members of the band Pretty Blue Gun who were signed to Cavell Records, an indie label licensed to Sony.

They released two critically-acclaimed albums. After PBG split, the couple went on to form a song writing/production partnership that led to placement of their songs in film and TV. All the songs on this specially-priced 2CD “This Wicked Pantomime” (Disc 2 consists of 11 previously unreleased tracks) are written by Neil who also plays all of the guitars. Vocals, keyboards, drums and engineering is by Bee.

Bee’s a vocal phenomenon with a unique range. At times, she can sound like Peter Perrett of The Only Ones, and at others, like a sultry Marianne Faithfull. David Bowie’s drummer from The Spiders from Mars, Woody Woodmansey and Elvis Costello’s drummer, Pete Thomas both guest on the record.

The record was mixed by Pat Collier (of The Vibrators).

What are the Press saying ?

“Manhattan’s avant garde would be proud of them.” – Pete Thomas

“They have a unique and refreshing approach to their music especially at a time when so many things being produced seem to sound the same.” – Woody Woodmansey

“Their goal is pretty clear and they deliver with tremendous musicianship and melodies that stay in your head from the get-go.” – MusicExistence.com

“Anchored in pop, FaB incorporate a great deal of styles into the sound ranging from Glam Rock to Psychedelic Rock. By far the heart and soul comes from their poetic lyricism which is delivered with a fiery passion that recalls David Bowie’s most playful and theatrical work.” – BeachSloth.com To our ears, FaB have created a swaggeringly fun record that cultivates some of the most beloved traits of pop music and yields a product that is not only easy to relate to but is stylistically different from anything else that’s on the market today. 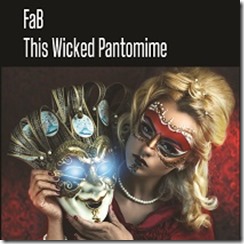 This Wicked Pantomine at Koolkatmusik